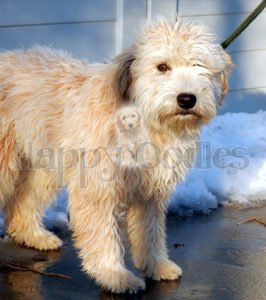 We had been searching for a Wheaten Terrier rescue for about a month when we came across this beautiful girl on PetFinder.com which we wrote about here.  We were looking for an allergy friendly dog and wheatens are supposed to be easier to live with for people with allergies.

Katy was listed as a very sweet 5 month old Soft Coated Wheaten Terrier that was good with children, cats and other dogs. It went on to say that she did not know how to walk on a leash but was very eager to learn and be loved.

We had previously found other Wheaten Terriers listed on rescue sites but none could be adopted by families with children. Since Katy was still a puppy and non-aggressive with kids or other animals we thought she could be a good fit.

As soon as we spotted Katy’s picture we sent in an application. We didn’t expect to hear back. We knew we were not the ideal family for a rescue dog in the eyes of most rescue organizations. Although we own our house, have a large backyard, experienced with shelter and puppy mill dogs and the means to care for a puppy, we still did not meet all the requirements for most rescue organizations. Our large yard is not fenced in, we do not currently have a dog, and we have young children with one under the age of 10 years old. In fact many of the rescue organizations we found would not even look at our applications because of those things. 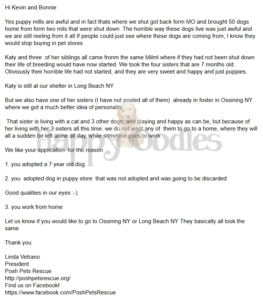 So you can image our surprise and delight when we heard back from the rescue granting us the chance to meet with Katy. In the response from the founder of the organization we discovered that they had rescued four wheaten terrier sisters. We were given the option to meet Ava, one of the sisters, who was being fostered closer to our home. We were also informed that there were at least 50 other applications for the dogs and there were no guarantees that we would be chosen.

The first step to meeting the pups was a phone interview with the foster family. It was on this call that we found out how Ava and Katy came to the rescue. They had been purchased at a dog auction in Missouri by the rescue’s founder. The pups found themselves in the auction after their owner became overwhelmed with the responsibility of caring for the dogs and in violation of the Missouri State Laws. Rather than rectify the violations the owner decided to auction off the dogs. The sisters who were living in one cage and never let out were being kept as breeding stock. Had the state not intervened, the dogs would have spent their life in a cage giving birth to as many puppies as they could before their bodies wore out. 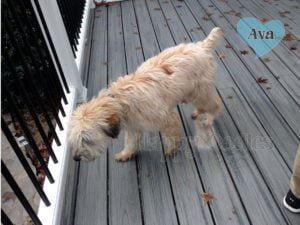 We also found out that Katy had moved to a foster home close to Ava so we would have a chance to meet both pups. We set up a visit with the foster parents the very next Saturday. We wanted to meet the dogs as soon as possible to make sure we stayed in the running. From our perspective the call went well with us mainly asking the questions, but we were again reminded that there were a lot of people interested in the dogs and that having a chance to meet them did not guarantee we would be chosen. 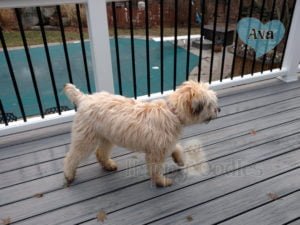 When Saturday came, we woke up early and made the long drive to the foster homes which were about 2 hours away in a neighboring state. We first met with Ava. She was being fostered in a home with 8 other dogs. A 5 month old German Sheppard who shared a space with Ava, a beagle with 7 puppies and the fosters’ two adult dogs. The German Sheppard and Beagles all needed homes.

When we first saw Ava, she was excited to meet us and competed for our attention. Though after a few minutes and a lot of competition from the German Sheppard puppy the excitement wore off and she took a back seat to the dominant Sheppard puppy. Overall she was quiet for a young Wheaten who are known for their energetic greeting. We then took the dogs outside but unlike the other dogs who romped around the yard, Ava didn’t seem interested in playing. At times she seemed lost, not knowing what to do. After about a ½ an hour we left to go visit with Katy. 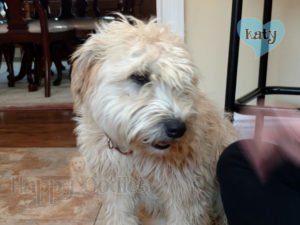 When we entered the second foster home, Katy kept her distance. She was too afraid of people to greet us or even come within petting range. When we tried to approach her, she ran away and urinated as a sign of submission and fear. There was a noticeable difference between Ava and Katy’s behavior. The time spent with the other dogs made Ava more outgoing. Even as reserved as Ava was, she was more of a puppy and playful then Katy. 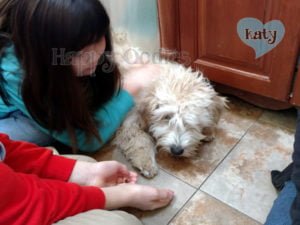 We all sat on the kitchen floor and waited to see if Katy would feel more comfortable around us. It was my husband who Katy first approached smelling his hand. Eventually she allowed us all to get close enough to pet her and eat from our hands.

On the drive home we asked the kids which puppy they would like. My son who was looking for an enthusiastic playmate picked Ava. My daughter who wants to save the world one animal at a time picked Katy, stating that “Katy needs us.” We reiterated that in the end it was not our choice. Although we could decline to adopt Katy or Ava it was the rescue who would decide where the pups were placed.

As soon as we came home we sent a note to the head of the rescue to tell her how we thought the visits went and to thank her for the opportunity to meet the puppies and also for saving their lives. 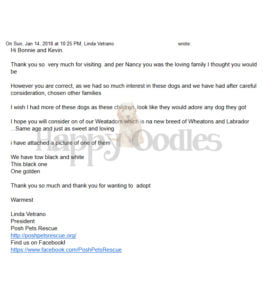 In the end we did not get Katy or Ava. We don’t know why but the rescue decided that different families were a better fit. Our kids were very disappointed as were we.

We will continue our search for our new family member, but will be more thoughtful in dealing with rescue organizations in the future.

Looking for a rescue to adopt?

I,m looking to rescue a Wheaten . I,m a active senior looking for a companion .

Finding a Wheaton Terrier as a rescue is not going to be quick. I looked for about 6 months before I gave up. We found the wheaten terriers in the article through petfinder.com I suggest that you set up an alert to let ou know when one is posted.

Also look for wheaten terrier rescues in your area.

Good luck in your search.

Happyoodles offers real life experiences and researched information on finding and caring for your perfect pup.

Happyoodles is owned and operated by two dog lovers and one cute pup named Bella, a poodle crossbreed we rescued from a shelter.

You can read more about us on our contact page

As an Amazon affiliate I can earn a commission from qualifying purchases.